Last night, Chris Harrison and company delivered the most “shocking Bachelorette finale ever!” (although I am pretty sure they say that at the end of every Bachelorette/Bachelor season). In the previous episode, Desiree had been dumped by that Utah man with the flowy graying hair and was left with Drew and Chris (who I didn’t even notice until the Hometown Dates where I realized he was that tall, cute, mediocre poet but couldn’t ever recount his name). There was a lot of awkward crying going on – in fact, 18 minutes and 27 seconds of crying to be exact. I timed it on my iPhone as my own personal drinking game.

I was all Team “Des is going to wind up alone because almost all these guys sucked from the get-go”, but it turns out I was wrong and she chose her second cheese, Chris the Mediocre Poet.

To ABC’s credit, they edited the sh-t out of this and framed the romance as “he was the guy in the background all along who was waiting for her to realize her feelings” (or as one blogger brilliantly put it – this episode should have been subtitled  This is Totally How ‘Pretty in Pink’ Should Have Ended, You Guys) instead of just calling it what it is: he was the rebound guy!

Then came the long hour that is After the Rose and we had to watch Brooks (whose hair was notably not so gray anymore…) awkwardly congratulate Des on her engagement. Then we had to watch Drew just be awkward. Then we got to see the happy couple and I couldn’t help but notice how much Chris seemed to be into her and how little she seemed to be into him. But I’ve read a lot of advice articles that say “In the beginning, the man should be more into the woman” (something about how he needs to be the chaser, yada yada yada), so maybe this is the start of a great romance for Des and Chris.

So that’s my 2 cents on the only reality TV I watch. I have one long month until I can get back to my real TV viewing passion –The Walking Dead, Season 4. Forget reality show romances with short expiration dates; I’m a sucker for slow-moving zombies! 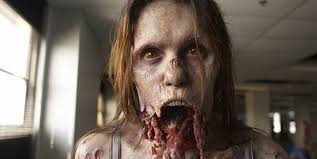 Some Who Wander Are Lost